Stolpersteine: when stumbling can be good 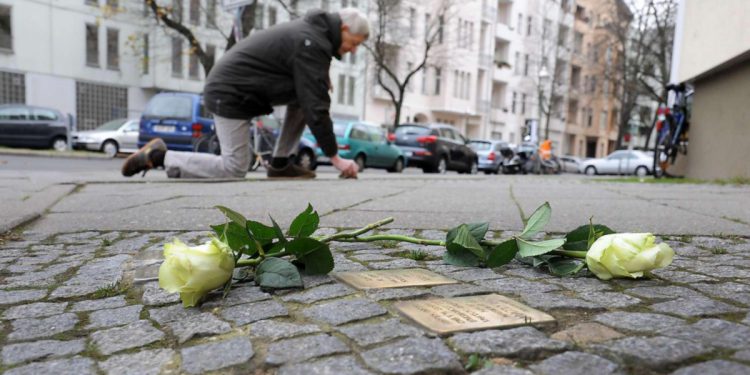 “A person is only forgotten when his or her name is forgotten.”

Starting from this maxim from the Talmud, in 1995 a German artist Gunter Demnig, launched the idea of ​​‘Stolpersteine‘. ‘Stumbling stones‘.**

The ‘Stolpersteine‘ are of stone blocks, large more or less like a cobblestone incorporating a brass plate approximately 10×10 cm (4×4 in) . On the brass plate is engraved, when available, the personal data of male and female victims of Nazi persecution.

These small stones are embedded into the sidewalk, in front of the house where they had lived before undergoing deportation and being murdered. Most of them are dedicated to Jewish people, but in lots of them are inscribed the names of communists, gypsies, Jehovah’s Witnesses, homosexuals, the mentally ill, etc. .

This information is intended to give individuality to those who were just reduced to a number.

The stumbling block to which the artist refers is clearly metaphorical. It is not a stumbling block in the physical sense, but a visual and mental one, that wants one to stop and reflect when passing or running upon, almost always by chance, in the work.

If I had to rely only on my personal experience, I can assure you that the goal is fully achieved: when I come upon one of these stones I can’t keep walking without reading the engraved name and, whether it’s a child, a girl or an elderly person, that there, in that house, had spent their lives, I think of the children I see playing happily in the parks, of the girls walking happy down the street, whispering to each some secret or of my elderly neighbor, with whom I exchange small talk every day about the weather or the price of würst; even those poor souls once conducted a similar life.

Not everyone is happy to have the ‘Stolpersteine‘ in front of their home: fear of remembering? Denial? In Rome, a man destroyed them saying that they bothered him, and they were even on the sidewalk opposite his house.
It’s recent history that several in Munich, in Bavaria, opposed the artist’s desire to position into a curb some of these little plaques.
Now, despite this kind of opposition, we can ‘stumble’ across all of Europe: thousands of stones are in fact in every country that has suffered Nazi barbarism.

**First installed in 2009 in Oberhausen and Köln.