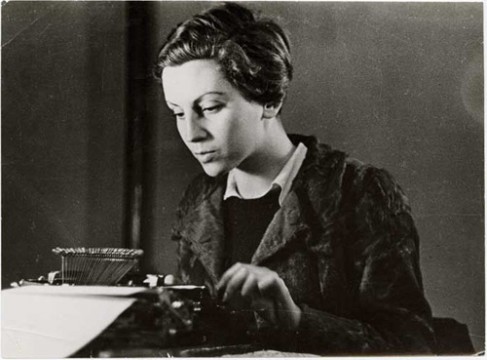 On July 26, 1937, at age 26, newspaper correspondent Gerda Taro died in war torn Spain, a woman that can as well be considered the first war reporter fallen in a battlefield.

She was born in Stuttgart on August 1, 1910 in a Polish Jews well-to-do family. Her official name was Gerta Pohorylle.

Her upper – middle-class origins did not prevent her to join various Socialist and Communist-inspired movements in her native Germany. With the rise of Nazism, her radicalism and her Jewish origin started causing her many problems, including incarceration for her membership in the German Communist Party. Once released from prison she decided to take refuge in Paris.  There her life took a decisive turning point when she met the photographer Endre Friedman, a Hungarian Jew and fellow communist.

The two fell in love, with Endre teaching Gerta the rudiments of photography. Times were hard and in order to increase their meagre revenues, the two came up with the idea of an imaginary flamboyant American photojournalist, called Robert Capa, who supposedly had come to offer his skills in Europe. The plan mysteriously worked and commissions for Endre, alias Capa, increased his workload tenfold. The newly acquired financial comfort did not however prevent the couple from taking the bold decision of going to Spain and document the civil war, where they produced photo reportages published by several French magazines.

Gerda became immediately popular among Republicans fighters, not only for her courage by exposing herself to great risks in taking her war photos, but also for her beauty, making Endre one of the most envied men at the frontlines.

Gerda was at the front row during the battle of Brunete, a decisive battle for determining the fate of the civil war, where she documented the fierce aerial bombardment targeting the Republican army. During one of these air raids, the car in which the journalist was traveling was hit by a tank, ending up under its tracks.  Badly hurt, her main concern during her trip to a field hospital was the conditions of her cameras. Severely wounded, she died after a prolonged agony. 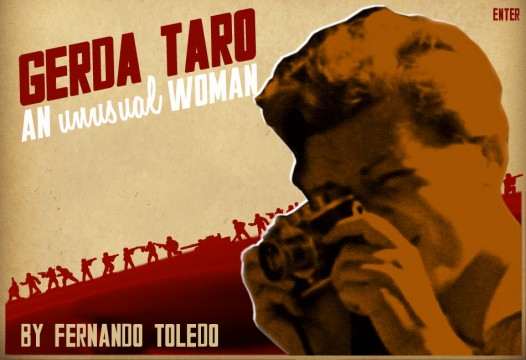 In recent years, the great value of Gerda Taro’s professional talent has been truly recognized and efforts have been made to find more of the pictures she made. A difficult task since, as it has often happened with other great women, she was mostly known only as “the companion of …” and it is not a simple task to single out her photos from those produced under Endre’s alias, ‘Robert Capa’.

Her body was interred at the Pere Lachaise cemetery in Paris. Her eulogy ‘in memoriam’ was delivered by Louis Aragon and Pablo Neruda. During the war her resting place was desecrated by the French collaborators who resented the enormous popularity still enjoyed by the young Jewish communist revolutionary.